You can visit much of the Pre-Revolution history of the United States throughout the many trails and historic sites of the nation. And don't miss out on the Native American history throughout Florida or other regions. The history of the nation and North America comes from the culture of the many tribes that made up the mosaic of human culture in each state. They were here before the majority of us, after all, and their history is an amazing collection of wonder, beauty, and dedication to the land that sits beneath us.


Sponsor this page for $150 per year. Your banner or text ad can fill the space above.
Click here to Sponsor the page and how to reserve your ad.

1600 - In present-day Arizona and New Mexico, members of the Franciscan order of the Catholic Church establish missions in Hopi and other tribal areas under charter from the King of Spain.
April 26, 1607 - After five months at sea, three ships led by Captain Christopher Newport reach Cape Henry on the Virginia coast. The Susan Constant, the Discovery, and the Godspeed, later move up the James River for forty miles till they stop on Jamestown Island.

May 13, 1607 - The three ships land in Jamestown, establishing the first English settlement in the United States. There are 103 settlers among them. Upon arrival, Captain John Smith is named to the governing council.
September 3, 1609 - Henry Hudson, working for the Dutch, sails into New York harbor and up the river that would bear his name to Albany.

July 29, 1609 - Samuel Champlain battles an Iroquois party after his further exploration of the New World discovers Lake Champlain in early July and claims Vermont for the Kingdom of France.

March 17, 1614 - Governing body of the Republic of the Seven United Netherlands proclaims exclusive trade and furthur exploration between the 40th and 45th parallel, New York to Maryland, to New Netherlands Trading Company for three years.
April 5, 1614 - The history of Jamestown continues with the marriage of Pocahontas to John Rolfe, who would bring tobacco seeds to the colony and begin its harvesting this year. Their marriage led to eight years of peace among the colonists and Indians.
1600 to 1615 - American Indian Felipe Guaman Poma de Ayala (Quechua) illustrates his 1,189-page book, El primer nueva corónica, y buen gobierno.

1618 to 1619 - Smallpox epidemic wipes out 90% of the Native Americans in the Massachusetts Bay area.

July 30, 1619 - First representative assembly, the House of Burgesses, held in America is elected in Jamestown. The next month, the Dutch land with indentured servants, African slaves, in Jamestown.

November 11, 1620 - The Puritan expedition which left England for the New World on September 6, reaches Cape Cod near Provincetown, not their original destination of Virginia. They explore the coastline for an appropriate settlement location.

December 11, 1620 - A landing party searches the coast for a suitable site for a settlement and start to move the entire party to Plymouth Harbor. Plymouth Rock was identified as the first solid land the Pilgrims set foot on.
December 20, 1620 -The Puritans begin to establish settlement in Plymouth. They form the Mayflower Compact, which established a government and legal structure. During the next winter, half of the colonists would perish. Site of the settlement had previously been the location of an Indian village that had been wiped out in 1617 by a plague.

September/October 1621 - The first Thanksgiving celebration is held in the autumn for three days between the Pilgrims and members of the Wampanoag tribe, who had helped them settle and plant the colony's land.

March 22, 1622 - The Indian Massacre of 1622 occurs when Chief Opchanacanough and the Powhatan Confederacy tried to rid the colony of settlers. One third of the colony at the time, three hundred people, were killed.

1623-1626 - In the area of New Mexico, on Navajo land, warriors of the Jemez Apache tribe war against Spaniards and Tiwas.

May 6, 1626 - Peter Minuit, one of eight men left by Dutch explorers headed for the Albany area from the ship New Netherland on Manhattan Island, buys the island from the Man-a-hat-a Indians for $24 in trinkets.

July 20, 1636 - Pequot War begins between Pequot tribe and their alliance against the Massachusetts, Plymouth, and Saybrook colonies. War ended on September 21, 1638 with the Treaty of Hartford. Only two hundred Pequot tribe members remained.
October 28, 1636 - Harvard College is founded in Cambridge, Massachusetts.

June 1636 - Providence, Rhode Island is founded as a colony by Roger Williams two years after his banishment from the Massachusetts Bay Colony. Its charter would be granted eight years later as a democratic colony believing in the separation of church and state.

1640 - The first book is printed in North America, the Bay Psalm Book.

1641 - Witchcraft is made a capital crime in English law. The Massachusetts colony becomes the first colony to legalize slavery.

March 1, 1642 - York, Maine of the Massachusetts Colony (known as Georgeana in colonial times) becomes the first incorporated city in the American colonies.

1643 - The book, A Key into Language of Americas, is published by Roger Williams, co-founder of the Rhode Island colony.

April 18, 1644 - In the last Indian rebellion in the region, Opchanacanough and the Powhatan Indians attack the English at Jamestown, but their effort is repulsed and proves unsuccessful.

May 29, 1647 - The constitution of the General Assembly of Rhode Island is drafted, under the values of separating church and state, as well as permitting public referendums and initiatives in legislation.

1650 - Slavery is legalized in Connecticut and recognized in the American colonies.

June 9, 1650 - The Harvard Board becomes the first legalized corporation in the American colonies.

May 18, 1652 - Rhode Island passes the first law in the American colonies restricting slavery, making it illegal for more than ten years.

August 22, 1654 - Jewish settlement in the American colonies begins with the arrival of twenty-three settlers from Brazil in New Amsterdam.

September 15, 1655 - Peach Tree War begins with attack on New Amsterdam and Pavonia along Hudson (North) River by Susquehannock Indians and their allies as retaliation for the loss of New Sweden to the Dutch. Indian victory forced many Dutch settlers back to Fort Amsterdam.

September 13, 1660 - The Navigation act is passed by British Parliament to control colonial commerce in the New World.

March 24, 1663 - Eight English nobleman given charter to establish the Colony of Carolina by Charles II after their assistance in restoring him to the throne three years earlier.

September 8, 1664 - Three hundred British troops seize New Netherlands from the Dutch in a peaceful takeover. The Duke of York, brother to Charles II, is granted the Dutch province and city of New Amsterdam, renaming them New York.
September 6, 1667 - A large hurricane ravages southeast Virginia, with twelve days of rain, causing damage to plantation homes and crops.

March 9, 1669 - Johann Lederer leads expedition from the York River into the Appalachian Mountains at the behest of Colonial Governor Sir William Berkeley, who believed a passage to the west and Indian Ocean only a few weeks away. Lederer becomes the first European to crest Blue Ridge Mountains and see the Shenandoah Valley.

May 17, 1673 - Jacques Marquette and Louis Jolliet explore midwest states along the Mississippi River from Wisconsin to the Arkansas River.
August 9, 1673 - Dutch forces recapture the colony of New York (New Amsterdam) from the British, but would only be able to hold power in the area for one year.

June 20, 1675 - Beginning of King Philip's War in New England with Metacom Indian forces attacking colonial settlements due to encroachment on the land. Considered the costliest war for European Settlements in relation to population with Indian success during first year halted later when their alliances fell apart. Twelve towns destroyed.
September 19, 1676 - Bacon's Rebellion causes the burning of Jamestown. Nathanial Bacon leads the rebellion of planters against Governor Berkeley. Bacon would perish and twenty-three others were executed.

August 12, 1676 - The Indian War, King Philip's War, between the Confederation of New England tribes and the colonists in New England ends.

June 23, 1683 - The colony of Pennsylvania is established when William Penn signs a treaty with the Delaware Indians and pays for Pennsylvania lands.
1684 - Additional outposts, at the behest of Cavelier, in Illinois and Texas spread the influence of the French in the central part of the American territories.

September 25, 1690 - The first newspaper issue in the United States publishes in Boston, the Public Occurrences. It was suppressed after its initial issue and the publication of a regular newspaper would not begin again until 1704.

1691 - The Plymouth colony, which had remained independent since its founding in 1620, joins the Massachusetts Bay Colony.

February 1692 - May 1693 - The Salem witch hunts, spurred by preaching, results in the arrest of one hundred and fifty people and the death of nineteen. These trials were held in Essex, Suffolk, and Middlesex counties.

December 11, 1695 - Colonial Governor of New York, Richard Coote, and British King William III send Captain William Kidd on a mission to combat piracy, but by the end of his journey, Kidd becomes a pirate of the high seas. He would be hanged in 1701.
April 1699 - Jamestown is abandoned after the statehouse is burned in 1698 with the colonial government moving to Middle Plantation, renamed soon after as Williamsburg.
1699 - Additional French settlements would be established in Mississippi and Louisiana. 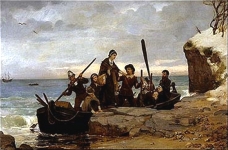 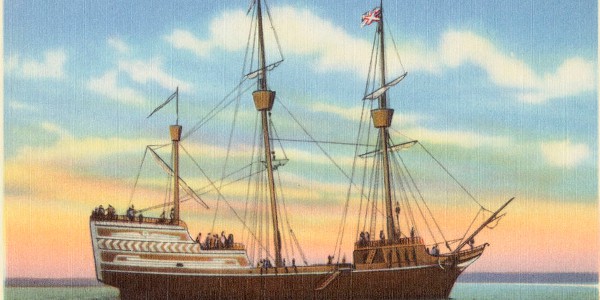